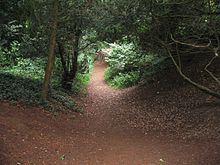 I’ve done a couple of really long training runs this month, both of them on Fleam Dyke and the Roman Road. I love being out on these old, old routes. Fleam Dyke is a Saxon construction which runs for four or five miles south east from just outside Fulbourn. It’s more or less parallel to the Roman Road to the south and you run along the top of it. There are fewer people on it than on the Roman Road. I didn’t see another soul the first time I ran there at the beginning of the month and yesterday I saw less than half a dozen people in two hours, all of them round Mutlow Hill.

The Roman Road is a thing of beauty. It’s my absolute favourite place to run. You pick it up just south east of Cambridge where it runs parallel to the modern road towards Linton. It runs almost all the way to Haverhill. There is a circular route which was established by the Friends of the Roman Road and Fleam Dyke which joins the two together. I use the Icknield Way or Harcamlow Way which runs through Balsham to get from one to the other.

Well, I try to anyway. I get lost whenever I leave the straight lines of the Dyke or the Roman Road. I know that where I need to be is somewhere “over there” but then the path I’m on goes all wiggly on me. I’m going to have to start carrying a compass and map with me. I check the route I want on a map before I set out but it never quite matches the terrain or I forget a turning or something. Anyway.

I’ve now done two runs over 20 miles along these routes and I’m smitten. The Roman Road is wide and relatively firm underfoot for most of its length. Fleam Dyke is narrow. You’re running along the top of the dyke and there are places where tree roots are a definite trip hazard for tired legs. There are steps up and down breaches in the dyke. I think it’s what experienced trail racers would call a “technical run.” It’s also breathtakingly beautiful in places.

Yesterday, I stopped for my final gel and a drink on Mutlow Hill. If the archaeologists are right, then people have been stopping here for 4,000 years. It’s a Bronze Age barrow and was an Anglo-Saxon meeting place. It’s one of the most beautiful places around here. I had one of those “who the fuck do I think I am” moments standing by a tree at the top of the hill. I thought that while it was very beautiful, the greenery was a bit sparse and yellow in the heat. The chalky, disturbed soil must be quite poor up there. I had completely forgotten that just because there was a path and a handful of people around, that even although people had been managing this landscape for four millennia, it was still a wild place. What reminded me was the sight of a couple of butterflies intent on a spot of lepidopterile rumpy-pumpy. It was windy up there and they were blown past me quite quickly but they still gave me pause: who am I to criticise the butterflies’ love pad?