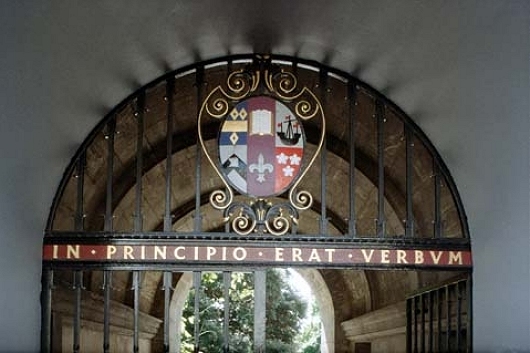 This is the gate leading into St Mary’s College from South Street in St Andrews. I used to work here sometimes in Lower Parliament Hall. The room was quiet and usually very warm which is just what you want in the middle of a St Andrews winter. Each large desk could take four people easily but most days you could have one and its little table lamp to yourself. Settle in, spread your books out, organise your papers and notes and just as you get going someone comes in to take you off for tea in the Merchant’s House…

In the beginning was the Word. I said last time I would talk more about this. Julian will probably be very disappointed in my theology. He may even be relieved that I’m not going to touch on theology much at all. I find theology as incomprehensible as quantum physics In spite of spending a lot of time contemplating both over the years.

No, what I want to consider is the power of words. Again. And again I’m going to quote Terry Pratchett, this time from Wyrd Sisters.

Humans had built a world inside the world, which reflected it in pretty much the same way as a drop of water reflected the landscape. And yet … and yet …

Inside this little world they had taken pains to put all the things you might think they would want to escape from — hatred, fear, tyranny, and so forth. Death was intrigued. They thought they wanted to be taken out of themselves, and every art humans dreamt up took them further in. He was fascinated.

It is completely possible to create reality with your words, or at least a version of reality which resonates with your audience’s prejudices and preconceptions.

Doesn’t she look tired. That’s all The Doctor had to say to start the fall of Harriet Jones. I really shouldn’t go into everyday sexism again. It feels like mansplaining. All the same, I don’t think a male character would have been so badly affected by that particular sentence. Six little words.

Words change worlds. We are constantly creating our reality for ourselves in our heads, consciously or unconsciously filtering the messages we receive from beyond our skulls. We fill our little realities with the messages which reinforce our world view and try – some of us at least – we try to communicate that world to others. The best of us create a shared experience using imagery with which our audience can identify.

The worlds we create vary wildly and that’s fine for writers deliberately creating fiction. My wife is busily engaged in what she calls “world building” for her latest book. It’s hard for her because she has to create a history, a mythology and a cultural back-story for a world which has never existed and she has to do it in such a way that she can tell a story to which her readers can relate. It’s so much harder for a science fiction or a fantasy writer than it is for a writer of crime or romantic fiction.

It’s relatively easy for a creator of political fiction. He or she just needs to evoke the images which resonate most strongly with their audience. Immigrants as terrorists or rapists. That’s always been an easy sale for anyone talking to a British audience. Tales of xenophobia are common enough down history. I’m not saying that we’re all racists and xenophobes because my experience is absolutely the opposite of that but it’s easy for those who wish to conjure those images given our common cultural backstory.

In the beginning is the Word and sometimes it isn’t a very pleasant Word. The worlds we create with our unpleasant words are equally unpleasant. Demagogues know this and exploit it. It suits them to demonise the strangers in our midst especially when we have more in common with the strangers than we do with the demagogues. We always have more in common with the people around us than the people who attempt to control our lives.

I’m not sure that it will make any difference at all but I shall make a positive attempt for kindness. I don’t have anything else to give. I’m not a powerful person. I have no money to speak of, certainly not enough to make a huge difference to anyone who needs more than a sandwich or a cup of coffee on a cold day. Money and power are so tightly entwined that access to one will almost certainly guarantee you access to the other. So, my acts of resistance, such as they are will be small kindnesses.

I will slip and fail because – as Julian knows – we all fail. My Twitter stream has not been the cleanest or kindest thing. The absolutely best thing about not being a Christian is that nobody expects you to to turn the other cheek. I have always been drawn to the New Testament story of Jesus clearing the money lenders from the Temple. That story is not one of gentle Jesus, meek and mild. I rather think that if we’ve got it wrong and there is a Second Coming, the Cleansing of the Temple is going to be but the start of our problems.

In the end though, the world we create for ourselves with our own words and deeds means that even if the fuckers are doing their fuckish things, then the people nearest, the ones with whom we have most in common, they won’t suffer as much for the Big Men and the Bad Words.